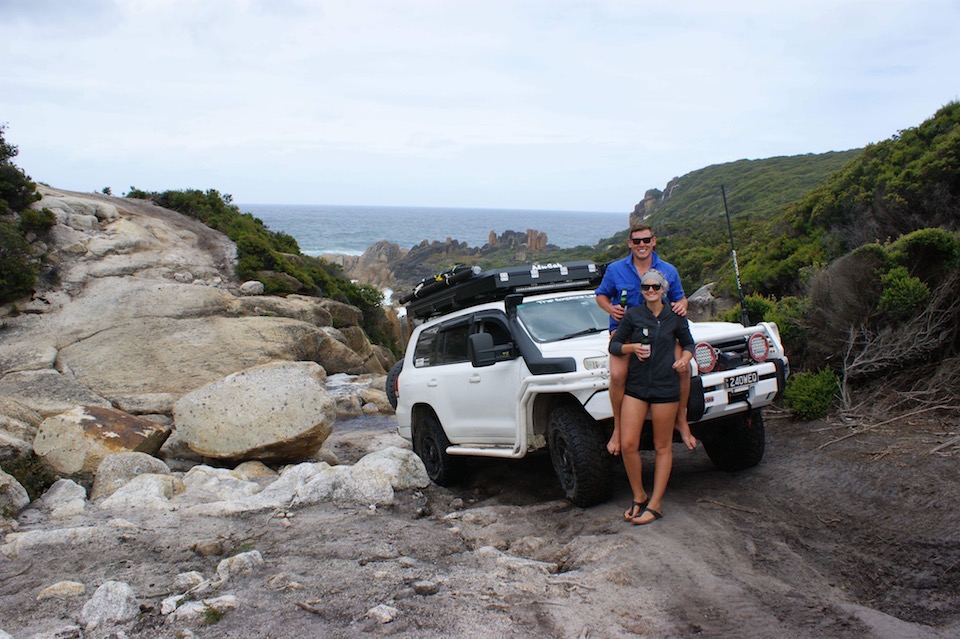 Meet Stace & Mick who live on the sunny Gold Coast but spend most spare weekends ‘airing down’ searching for adventure! This young, motivated couple plan on exploring Australia one solid trip at a time, “taking nothing but photos and making memories”. They drive a fancy white Rig some people would be envious of and aren’t afraid to give it a little nudge to prove what’s under the hood. Enjoy their story! 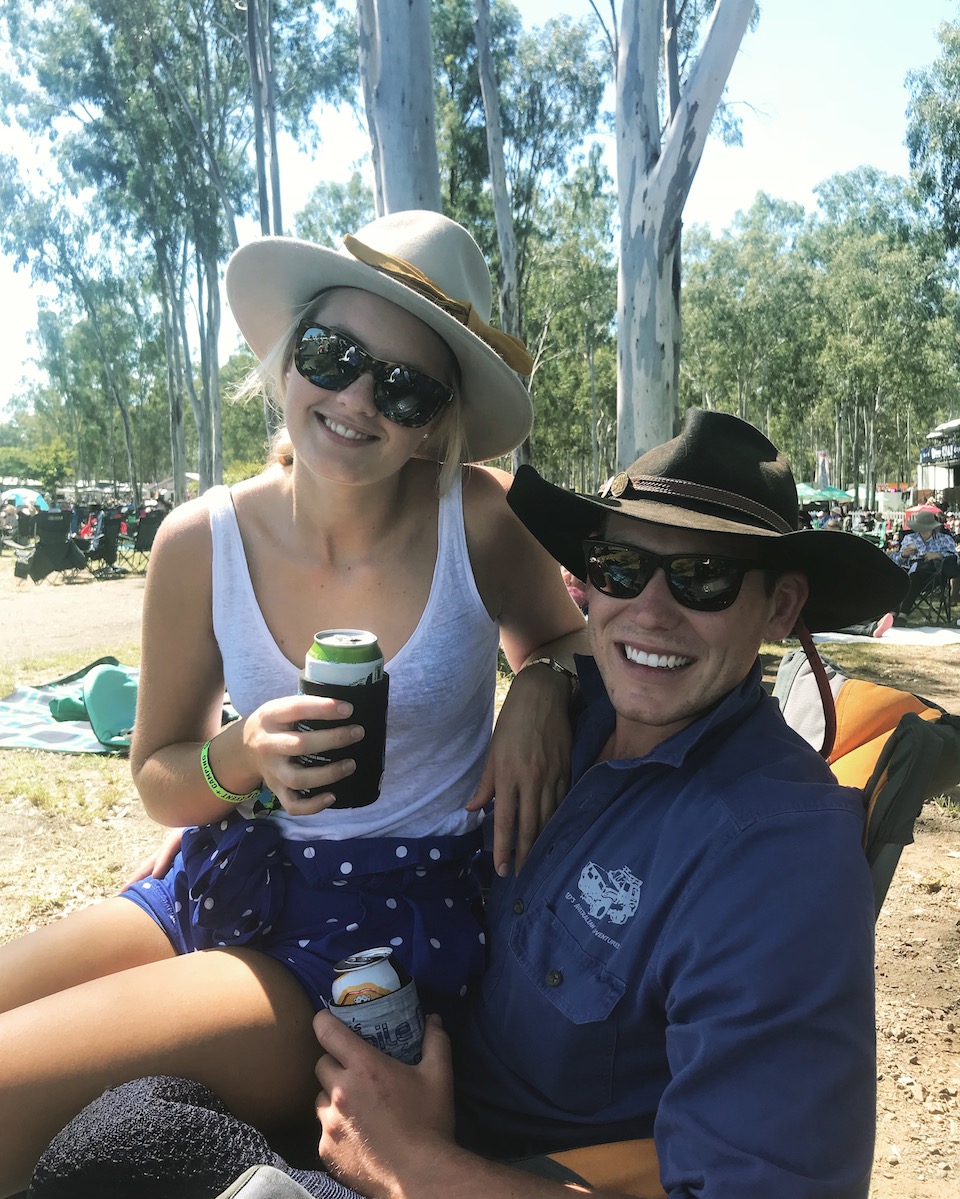 Who are you?
Airingdown;
Stace – Born & Raised on the Gold Coast, travelled Australia with her family during school. Got the bug at a young age and when she turned 17, she bought her first car and also a pop-top caravan. Travelled down the NSW Coast for a few months with the van before deciding that it wasn’t getting her to remote places. She sold the van, plans slightly changed and ended up getting a fulltime job again and went back to weekend offroad trips instead.
Michael – Born & Raised in Brisbane, grew up with his mates exploring and camping the local beaches and hot spots. Majority of his time spent out on the water on boats. Every other weekend they were out West shooting or hitting up the Roma Races.

Tell us about your RIG?
The Rig, she’s been set up for easy comfortable touring with only good quality gear. We wanted to know that we could be remote and never have any troubles with our truck or gear. One of Micks biggest ambitions was to build the ultimate Rig, even though the list seems to be endless – it sure is a pretty great setup and makes every trip comfortable. 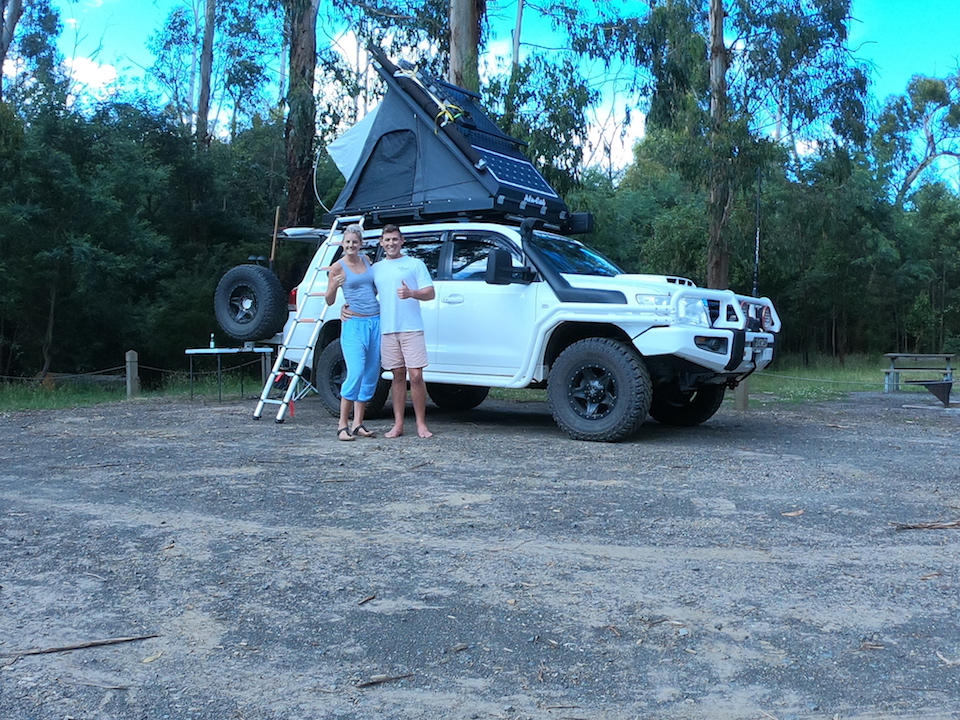 Favourite MOD on your Rig?
Not to blow wind here, but there’s a lot to offer. On a practical point, we wouldn’t be anywhere without the Redarc dual battery system to run both fridges to ensure the beers are frosty & food is cold.
Stacey is a tad OCD, and everything must have a spot and be put away, so the rear drawer system is great for organisation and to be able to have everything in the truck ready to go.
As far as aesthetics go, we love the Tuff Bar Dual Rail Side Bars. They sure do stand out from the crowd (and add a few inches when parking).

Swag, RTTent. Camper Trailer or Caravan? What’s your CHOICE & WHY?
RTT any day! Between us, we’ve swagged it numerous times, and had a van but we can both agree that our Alucab RTT is by far our favourite sleeping choice. It did take Stace to do a bit of convincing before Mick would agree but now we’d never go back. Whatever the weather, wherever we are it’s always a great sleep and super simple setup & pack down.

A MEMORABLE MOMENT you’ve had during your travels so far?
Tasmania – Bellingham to Bridport track.
We’d just arrived, it was our first day in Tassie of our two-week trip – we were pretty excited. We’d read up and heard from a lot of followers to give this track a go, and after the long straight roads from QLD down to TAS, we were ready to get off track.
We air’ed down, and started at Bellingham straight onto the beach, within about 5-10mins we decided to go up over a small dune to check out where all the tracks were leading to. Well, we got bogged, very deep, buried right down to the sidesteps. Thank god to MaxTRAX that got us out pretty easily. We then continued and found a well-used track behind huge dunes – there were bikes & comp trucks all over the place, so we sat down the bottom to spectate for a while taking in the scenery. Continuing on we saw 4wd’s coming down the side of the dune and going back up to the top where a crowd had gathered, so we thought we would go and join them at the top.
As we punched it up, metres from clearing the top of the dune, the car began to sink and just didn’t have enough momentum to make it over. We’d reversed at this point ready to give it a second shot, and as we’ve come backwards down, the sand began to push the whole truck sideways off the side of the dune. This was by far one of the most scariest 4wding moments I think of both our lives. As Mick tried to calm me down, we waved a quadbike over who got one of comp trucks over to come rescue us and snatch us backwards to safety.

To think what could’ve been if no one had been around still scares the shit of us. It just always goes to show no matter how much experience you have, every track is different and every state/area has different terrain. Tasmania’s sand is very soft and unpredictable. It sure was one for the memory bank, and one GoPro recording that shouldn’t be played with the sound on. 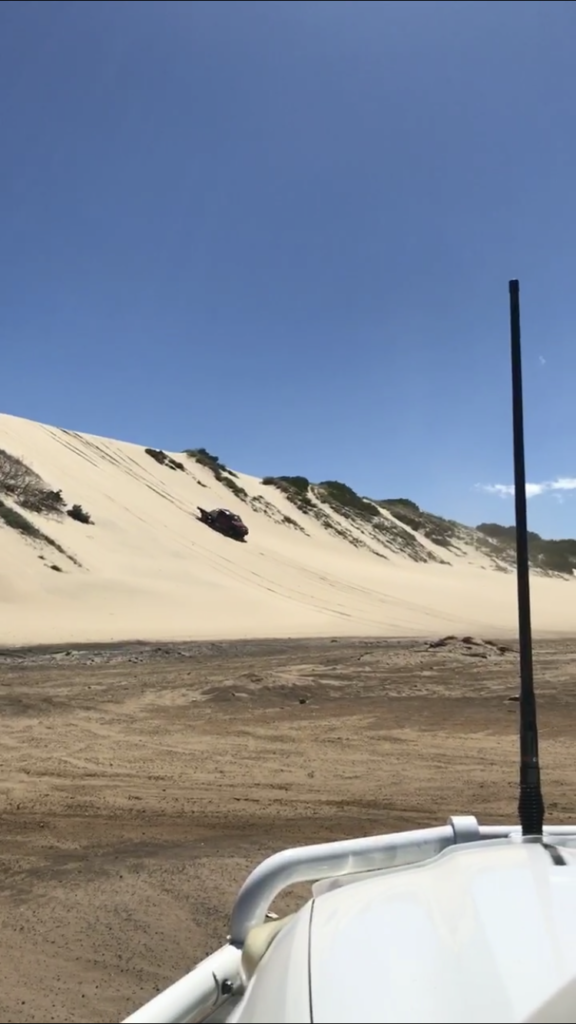 The Sand Dune in Tassie with the Comp Truck descending.

What Australian DESTINATIONS are (still) on your BUCKET LIST?
We’d love to say everywhere! But for now – NT – Uluru, Birdsville, Simpson Desert, Kakadu, WA – Kimberley’s, Coastline, Cape York round 2. (in no specific order yet)

Best LOCAL TRACKS or DESTINATION in your area?
It’s a no-brainer for us – Fraser Island. It’s already on everyone’s bucket list, but it’s got to be one of our favourites, and for us, it isn’t too far to sneak away for a long weekend.

What does the term ‘ADVENTURE’ mean to you?
Adventure –
Advise the other half when & where
Ditch work with a sickie
Very quickly pack the car
End up somewhere unknown
Never cancel the trip because of weather
Tell your mates where you’re heading
Use the Hema to get off the beaten track
Rip into a cold beer
Escape from reality

Why ‘Airingdown’?
The name airingdown came about as we were driving up the beach of Bribie Island sharing the passion between us of the thrill when you clock off work on a Friday, head north, let your hair and tyres down then hit the beach. This was when we decided airingdown is the first step of every new adventure and we wanted to share these adventures with people.

Craig Thornton is one part of 'Touring Downunder'. He and…

Meet Steve and Tracy from 'Dusty Tales'. We chose them…

Our featured Adventure Seekers this week, are a young couple that…

Recent Posts
Follow Our Tracks
Categories
Archives
Follow Us
Follow us on social media to stay on track with the latest news.
© Copyright - WinchandUnwind - All Rights Reserved 2020