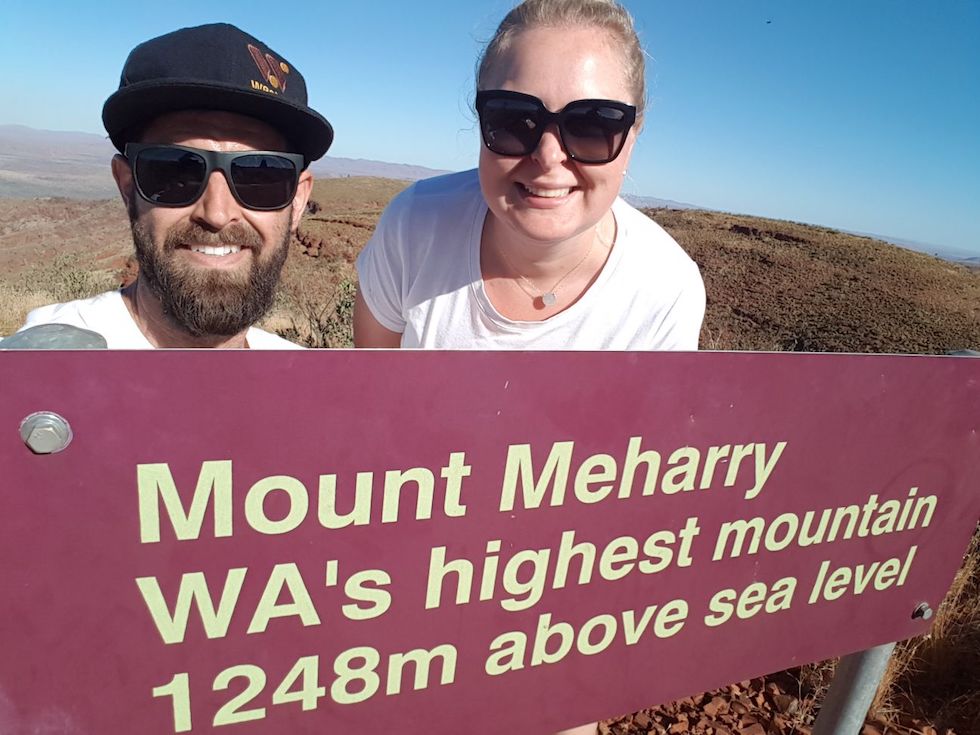 Most serious four-wheel drive travellers would agree that one of the highlights to owning an off-road vehicle is having the luxury of taking tracks that other vehicles can’t access. To get ‘off the Tar’ and visit some of Australia’s true ‘remote’ locations is a valuable experience and one that sadly, most Australians will never have the chance to do. That’s exactly what Rhys and Carly, our featured Adventure Seekers this week love the most about their current lifestyle – to explore off-road and camp in unique, isolated surroundings! As a couple, if they aren’t out four-wheel driving on their local beaches and tracks, they are planning their next big trip and like many, have a very impressive 4WD Bucket List.

What are you up to right now?
We are planning next year’s adventure. It’s a toss up between the Kimberley to cover what we missed last year and Tasmania. It’s a really tough decision and may come down to a literal coin toss.

What is your current off-road vehicle?
2010 Mitsubishi Pajero with a Rooftop tent setup for a mixture of day, overnight and touring trips. TJM bullbar & snorkel, Runva winch, Lightforce spotlights, 2” Lovell and Bilstein lift and 32” Dick Cepek tyres, airbags, bash plates and a drawer next to the ARB fridge in the boot. 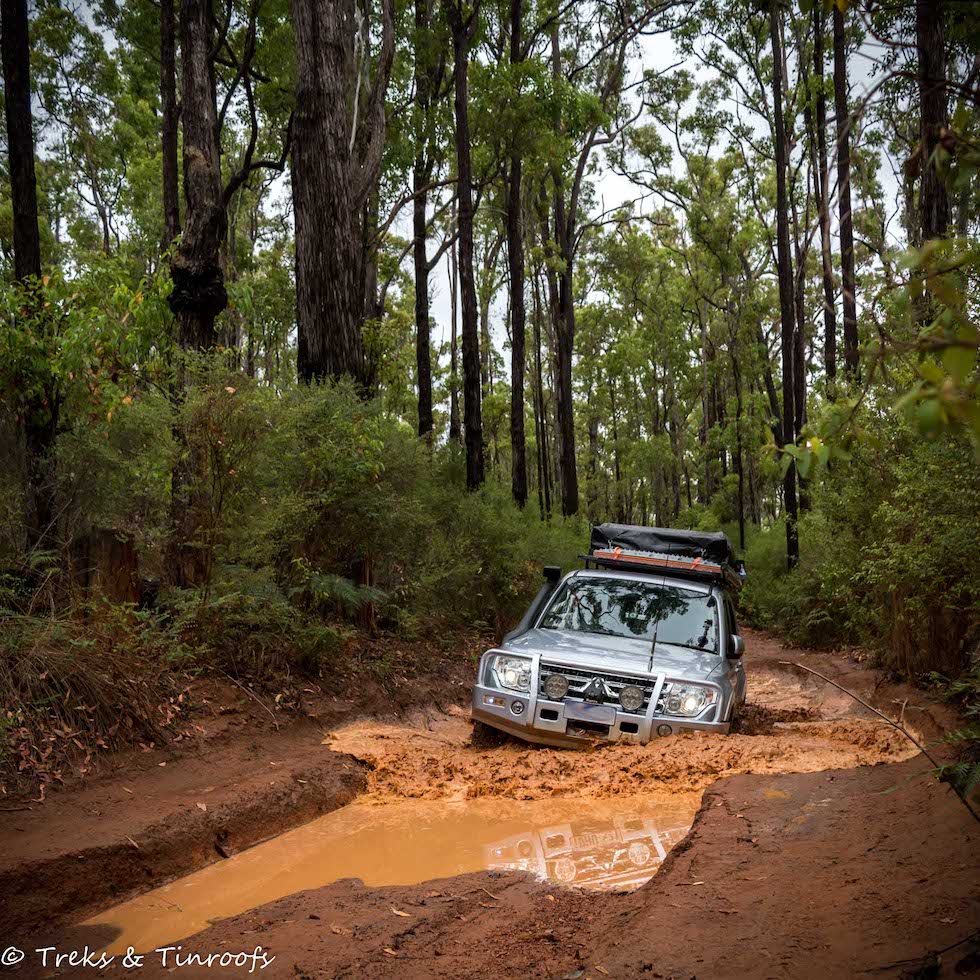 How old were you when you started your 4WD adventures?
About 8, my dad bought an old yellow Jeep Cherokee, it was so unreliable and when the gearbox broke he quickly upgraded to a Holden Rodeo. We went everywhere in that truck, and eventually, it became mine, it had just clicked over 500,000 km and was still going strong, but a small accident saw it end up on the scrap heap.

What was your first 4WD/touring vehicle?
1990 Ford Maverick which I’m now ashamed to say only saw the dirt a handful of times. Our first 4wd we bought for heading off road was a 2000 Nissan Pathfinder.

Who inspired you into this ‘adventurous’ lifestyle?
As a kid I was always watching Bush Tucker Man, he was my idol. A lot of our family holidays were spent driving, so I was fortunate enough to see some of WA, from there it has stuck, and now we are lucky our friends love exploring too.

What’s your all-time favourite 4WD track in Australia and why?
Probably Mount Meharry. It’s short but difficult. It sounds silly to our East Coast friends, but in WA we don’t have much in the way of decent hill climbs that really test the car and the driver. It’s a track where you didn’t have the option to stop, and for some of the tricky bits, I think Carly had her eyes closed. But once you get to the top you are standing at the highest point in WA, and the view is pretty amazing.

Exploring any part of WA has been incredible so far, and we are always amazed how different and beautiful our state is. Every time we get back from a trip, it pushes us to plan the next, and with so many incredible tracks around Australia, we are spoilt for choice. 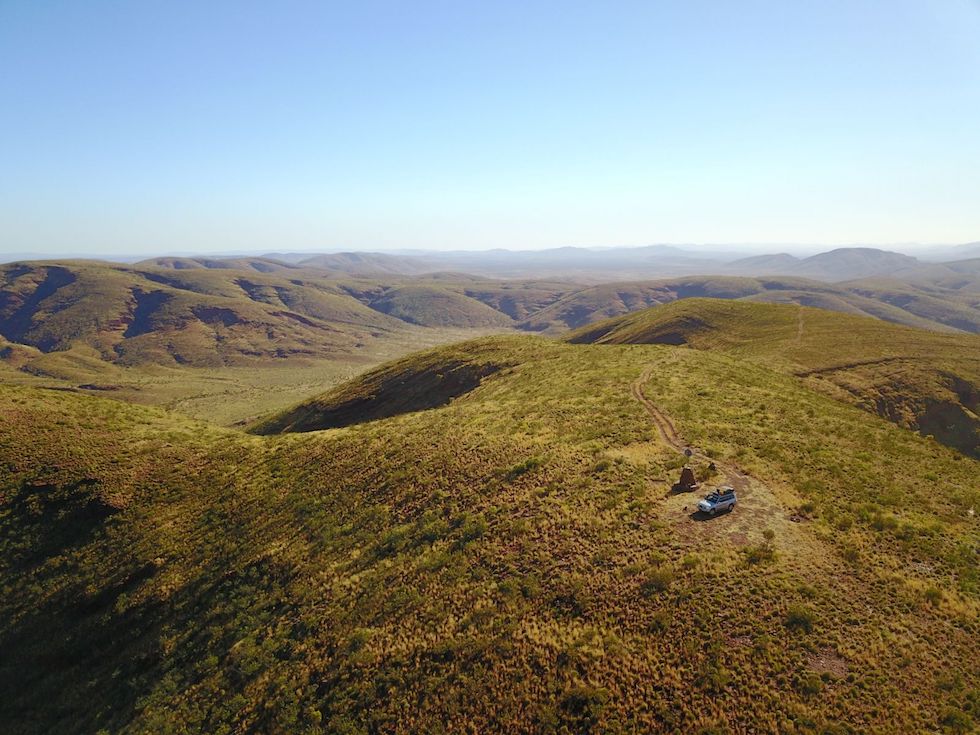 The most bizarre experience you’ve encountered on your travels?
When we were up in the Kimberley, we had a couple of nights at Diggers Rest Station (it’s where they filmed some of the movie ‘Australia’). The owners have an emu they have affectionately called Trevor. He took quite a liking to us, and he wouldn’t leave us alone the whole time we were there.  He’d sleep within 10 meters of us every night, and if you called out he’d respond, so we would always say good night and good morning. He’d follow us to the homestead and pace the fence till we left. If you turned and faced him while he was following you, he’d quickly look away as if pretending he wasn’t following. We still talk about him to this day, and it’s something we would never have expected.

Fondest memory of exploring Australian tracks?
We still get excited when we see a ‘4WD only’ sign and being able to explore where often the majority can’t is half the adventure. Having that freedom and sense of not knowing what you are going to tackle around the next bend is pretty incredible. I think we both knew we were hooked on the lifestyle when we took the Pathfinder onto Boranup beach in the South West. It was during our first big trip off-road together and being able to explore the forest, then pop out onto the beach and pretty much have it to ourselves is something that has stuck with us, and we never take for granted.

Describe your ideal campsite.
Somewhere with warm nights and sunny days. A view with some water, either a river, stream or the ocean so we can swim. If we are really picky no light pollution so we can star gaze all night, that way you know you’re far enough away from it all. 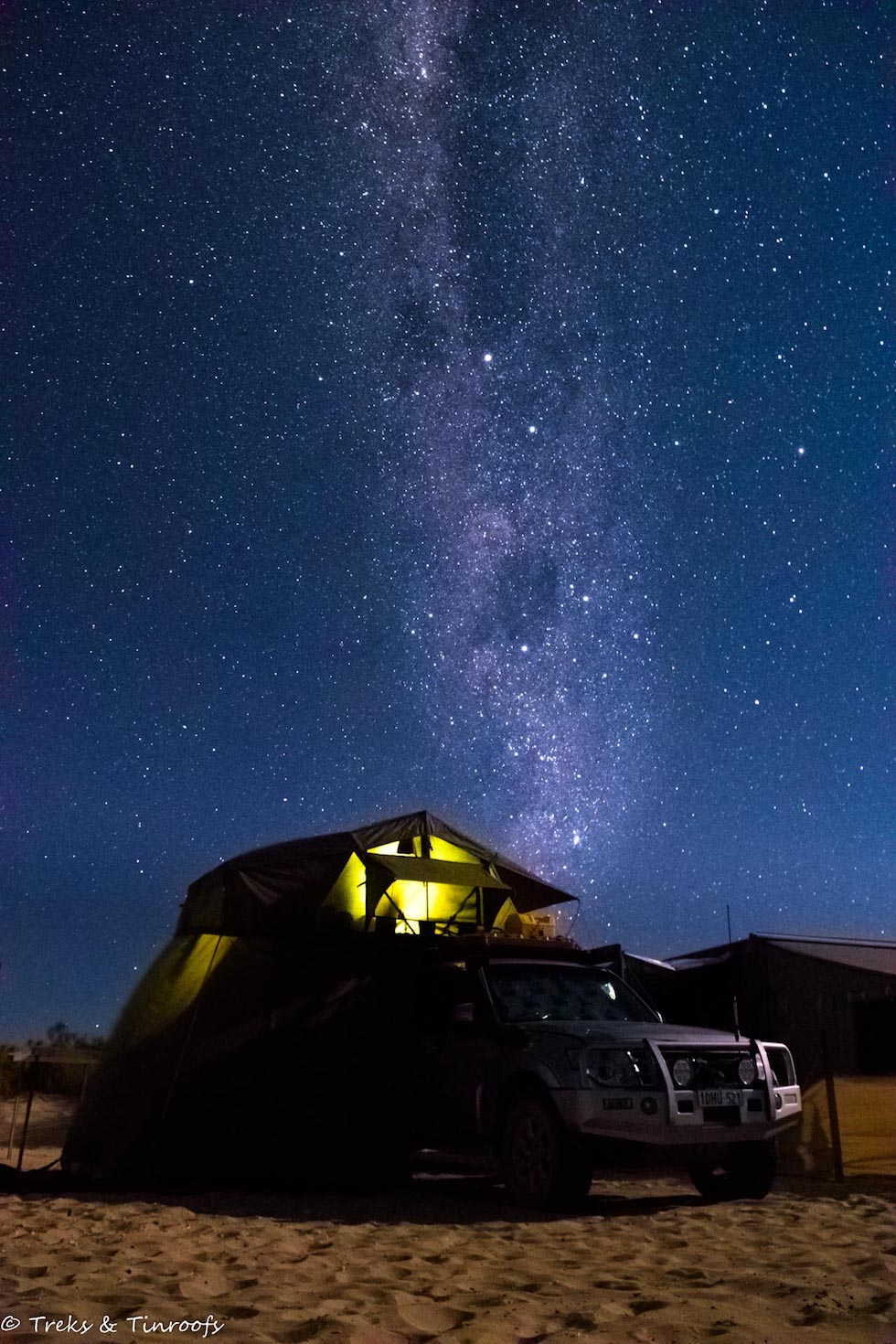 Australian Tracks are on your bucket list?
Where do you start…? Definitely the Gibb River Road. As for the rest, the Blue Rag track, Kalumburu road to Mitchell Falls, Fraser Island, Cape York, Dirk Hartog Island; The list is long, but those would be at the top of it.

Advice to new 4WD enthusiasts?
Don’t be put off if you don’t have all the bells and whistles, building up your car and gear is half the fun, it takes time and shouldn’t stop you exploring! In saying that make sure you have recovery gear, never leave home without it! Most importantly just get out there, enjoy and respect our amazing country!

Biggest mechanical fail during your travels?
Last year we had to cut short our Kimberley trip as both rear wheel bearings were shot. We found out while we were staying at El Questro so we had driven the easy bitumen part of the Gibb River Road but couldn’t continue further. We were pretty devastated as the whole trip started because we wanted to tackle the Gibb and it built up around that. In the end, it was the only bit of the trip we missed out on, but it just means that we get to plan another trip up to the Kimberley and that’s exciting.

Favourite meal to cook when you’re camping?
We normally keep it simple, and a staple would be bbq bacon and egg wraps for breakfast and anything we can try and do in one pot! But you can’t beat finishing dinner with cooking s’mores on an open fire; it’s our little bit of luxury. 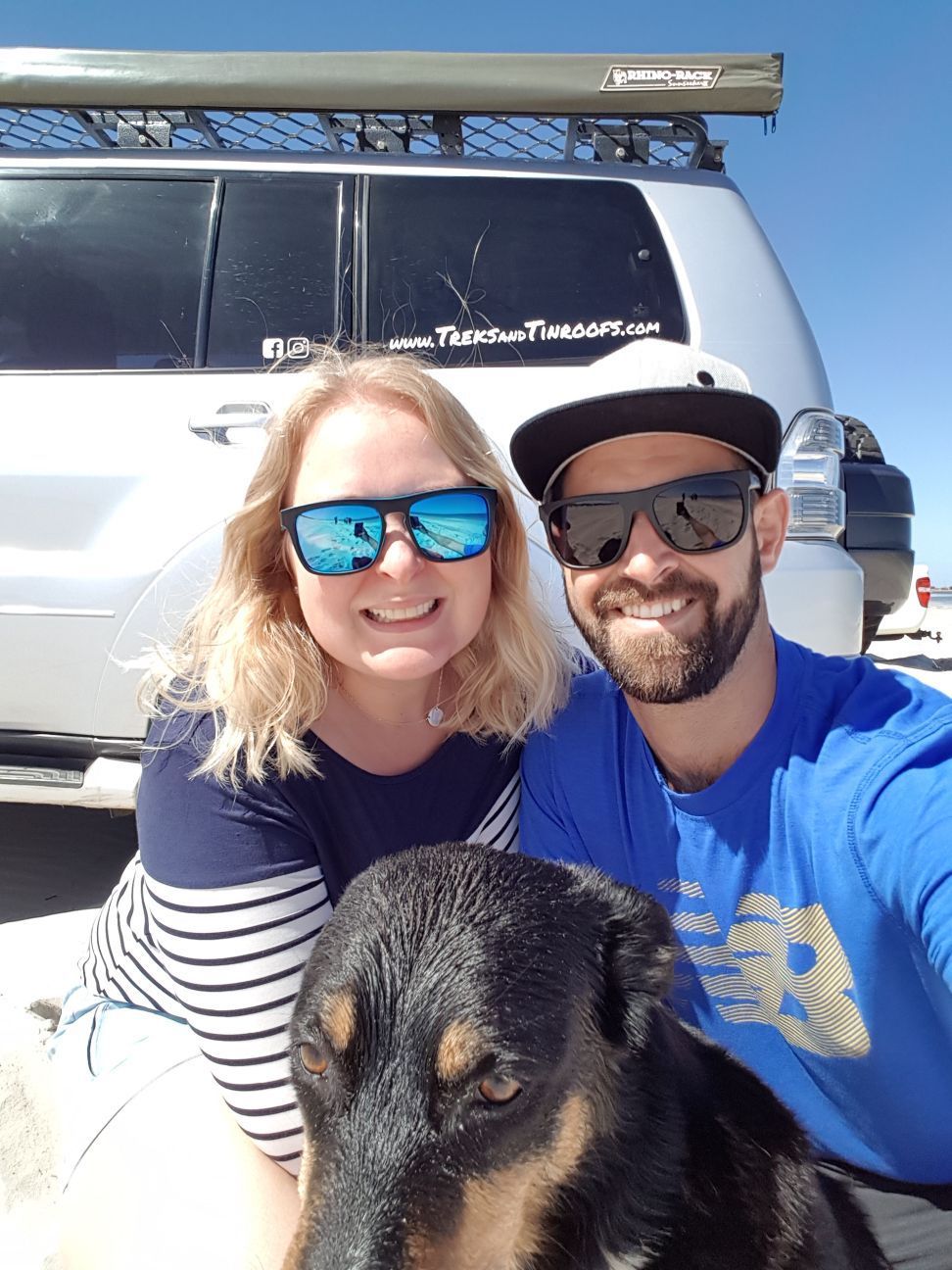 Connect with Rhys and Carly

Chris Burkard is one very inspiring man! His unique style…

Any single men looking for an adventurous Aussie lady who loves…

"Find something you love doing and do it as much…