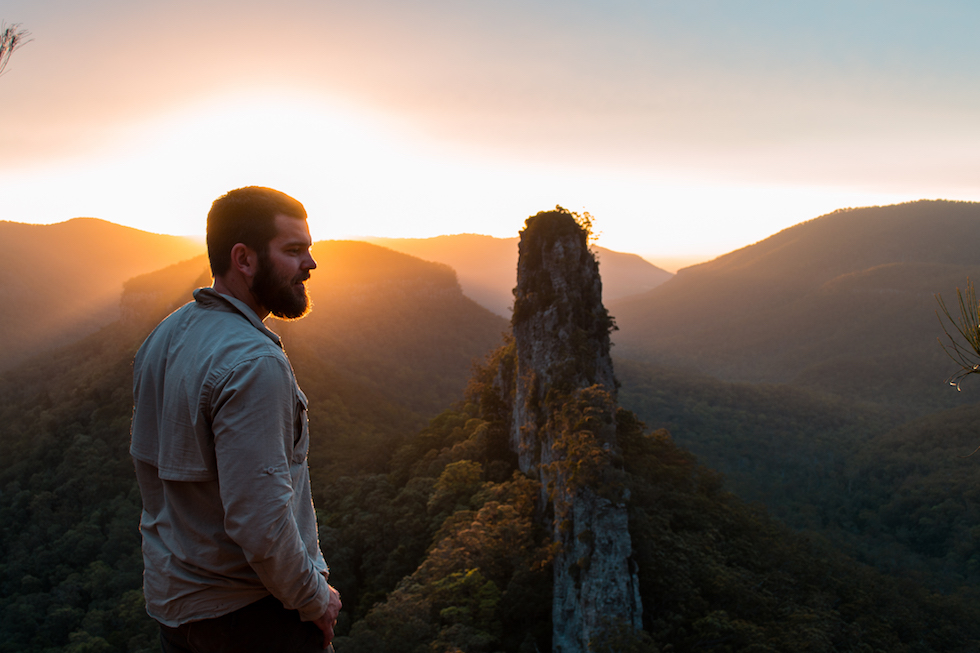 After a dedicated career serving Australia in the military, Dan Parkes acquired a full arsenal of life skills that easily crossed over into his adventurous civilian life. Since discharging from the military 12mths ago, Dan has made a regular habit to strap up his boots, throw on his pack and fill his weekends and holidays exploring by foot, hiking through the Australian bushlands. He describes himself as “average Aussie bloke”, but if you follow his ‘Bushies Untamed’ exploits, you’ll learn about a man who pushes his physical limits in hope to stand on top of the extraordinary! Enjoy Dan’s story.

Have you been able to transfer any of your military skills to your adventure travels?
Yeah absolutely – apart from becoming accustomed to carrying a shit tonne of kit on my back I am pretty comfortable with navigating and reading topo maps, both skills I otherwise wouldn’t have attained if it were not for my military days. I have been out bush in some pretty lousy conditions, and still the hardest days I’ve had in the scrub were during cold and rainy winter nights in the military. So no matter how hard the going is now as a civilian, I have built a sprig of optimism as those hard going military days remain, for the most part, unmatched. I do like a bit of a challenge though, so heading out in sweltering heat, pelting rain and freezing wind chill always adds a bit more excitement to the adventure.

How do you ‘Get Out’ and explore Australia and what ‘Go To’ equipment do you prefer using?
On foot is my main method of getting around – but only because I haven’t traded my hairdresser car in for a 79 cruiser yet (it’s coming). For a long while, I’ve been running a Platatac backpack that I’ve bashed around many countries and through a fair bit of tough scrub. I’ve recently upgraded to an Osprey Aether 60AG pack so I can carry a bit more kit and go out bush for longer. I’ve also just got my hands on a Merida mountain bike, so hopefully, that can take me to a few more places and lesser the load on the legs.

Have you been exploring recently?
I am currently enjoying school holidays and have been trying to get out and into the bush as much as possible. I have just returned from a bloke’s trip away to the New England Highlands which gave us plenty of opportunities to drive and stomp the land. It’s a good part of the world there in the New England Highlands. This year is looking exciting with the wife and I eyeing off the Canadian Rockies and a scoot down to Tassie to hit the Three Capes Track. Apart from that – weekends will be filled with overnighters in some cracker, local spots on the Sunshine and Gold Coasts as well as the Scenic Rim. 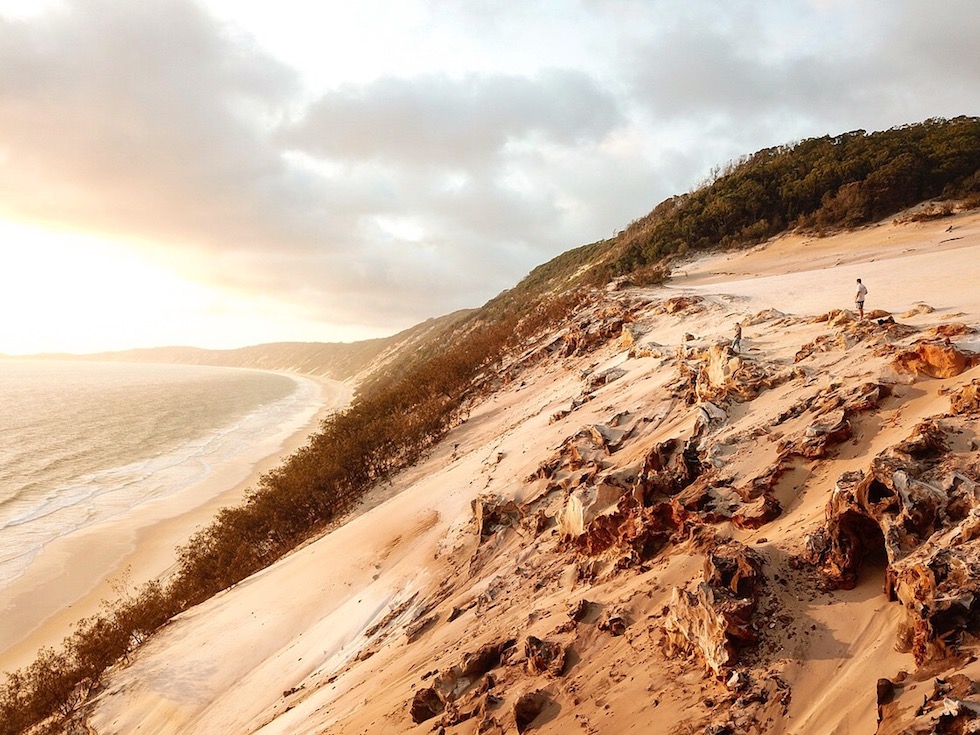 Come on, fess up, do you miss any luxuries while exploring?
Hell yes – the biggest luxury to miss is the ole 500g medium cooked rump steak with Diane sauce and chips. I can’t imagine the difficulty of humping up the gas bottle and cooker to the top of some of the amazing places I go just to cook up a decent feed – so I have to settle for my standard hiking tucker in tuna and noodles – nothing fancy.

Can you share one of the most memorable moments you’ve had during your travels?
Locally, my special place is at The Steamers which is located in a remote and rugged section of Main Range National Park. No photo or video will ever do that place justice – it’s simply amazing. Every time I go there, I have never seen another person, the birds are doing their thing and the view, well the view is simply unbeatable. Outside of my local area though, the most amazing place I have been to was on the Cape Raoul track on the Tasman Peninsula (hence our planned return to do the full Three Capes Track this year).

The most bizarre experience you’ve encountered on your travels?
I was in the Northern Territory at the beginning of last year, and I got to witness a 3.5m Olive python engulfing a curlew. I just sat and watched him, patted him on the head and snapped some shots. It was awesome to see a snake that big smashing down a feed.

Who inspired you into this Adventurous lifestyle?
I had been out of the military for 12 months when my love for going bush was re-ignited. So I guess I have been filling a void a little bit. I was always an outdoors kid, so I have the olds to thank for that. Nowadays, I am inspired daily (thanks, Instagram) by people that do anything outdoors, from 4WDing to bush cooking and from snake wrangling to hiking – I can always indulge myself in other peoples adventures when I am on the Monday to Friday grind.

Describe your ideal campsite.
Just anywhere with a killer view really – a spot to swim would also be a treat. To be ideal though, I’d have to be able to drive the gas bottle and cooker into location, so I can cook up a storm. 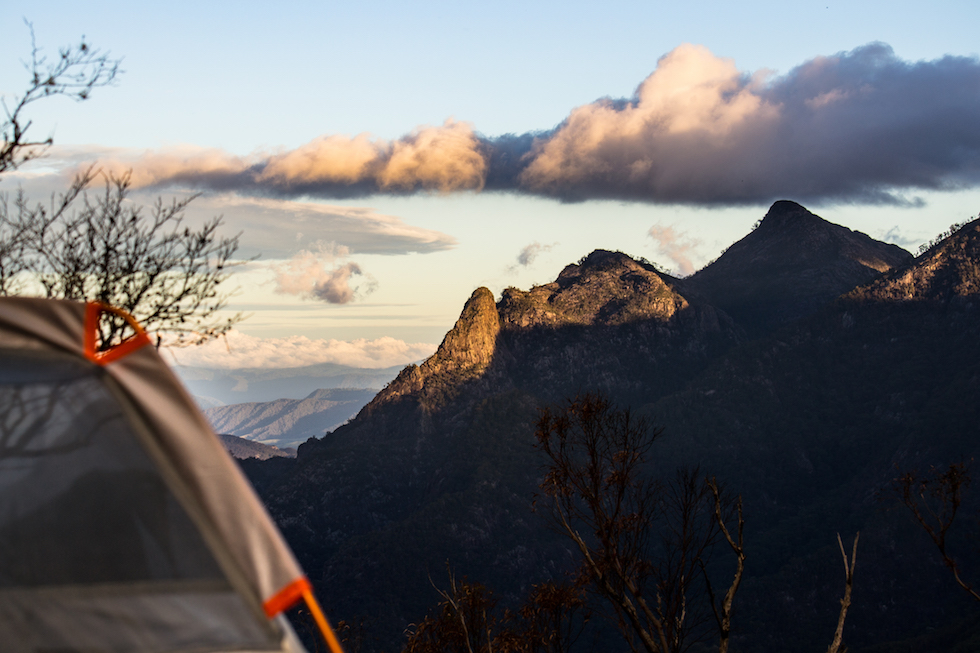 What is ONE product you wouldn’t leave home without?
The PLB and a bunch of compression bandages. You’re mad not to have these with you if you’re trudging around the Aussie bush.

Favourite MEAL to cook on the road?
The go-to meal when camping is BBQ’d potato chips, steamed broccoli and rump steak.

What DESTINATIONS and TRACKS are on your Bucket List?
Where to start – the three top places I want to hit is the Kimberly, Kakadu and The Cape. But I’ll have to wait until that 79 Cruiser is sitting in my driveway. I also wouldn’t mind knocking over sections of Western Australia’s Bibbulman Track and Northern Territory’s full Larapinta Trail on foot.

Have you got an EXCITING story to share with us?
Not exciting, but now the time has passed it’s a pretty good yarn. Early last year my wife received an envenomation from a highly venomous rough-scaled snake while we were perched high in the Great Dividing Range. Luckily, being at the top, we had phone reception, and a rescue helicopter was able to winch her off and zoom her to a hospital in Brisbane. She received two doses of antivenin (brown and tiger), had some crazy ups and down with her health and some plastic surgery after the bite site turned necrotic. All in all, it was a pretty harrowing experience and easily the most frightening situation I have been a part of. We are both super grateful that luck was on our side in more ways than one and that we had a bunch of good people there with us giving us a hand.

Connect with Dan on Social Media

If you're anything like us and enjoy remote travel, appreciate…

Here is a comeback story for you! After the result…

We asked Jon Riley to describe himself in 5 words…